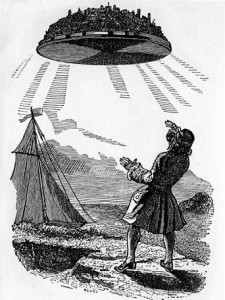 It seems the minds of these people are so taken up with intense speculations, that they neither can speak, nor attend to the discourses of others… From J. Swift, Gulliver's Travels

Laputa is the flying island of mad scientists, as it was imagined by Jonathan Swift in his most famous, satyrical novel Gulliver’s Travels (1726). An island inhabited by people of great minds and culture, but with little practical sense, lost in their speculations. These may be the shared feature between our Laputa and Swift’s. Citing another author which is also dear to us, i.e. Terry Pratchett, we could state that on Laputa we discuss «unusual, cruel geography». A flying island is surely unusual, and also cruel from a geographic standpoint, as it would drive any cartographer crazy! Yet, as it escapes any attempt to enforce normality besides any geographic convention, it is also the ideal place where to find curious, bizarre things and ideas, abandoned technologies, art, music, fascinating and little-known-of places. A place where broken objects are fixed, not disposed of. A little encyclopaedia of not-so-useful curiosities, or – more accurately – an encyclopaedia of items that you will not find in an encyclopaedia. And that you probably would not even think of searching for in an encyclopaedia, after all. But even Laputa has its own roles: the “things” that we host have to seek asylum first. In order to get a permission to stay, they have to comply with a few essential requirements:

On Laputa the most unusual, unuseful and unexpected subjects are treated, but all dealt with utmost strictness: if a fact is published on Laputa, you can rest assured that it is true.